Birmingham. Jasprit Bumrah is famous all over the world for his bowling. But on Saturday, he created history with his bat in England. He scored 35 runs in one over from fast bowler Stuart Broad. This is the most expensive over in Test history being played since 1877 i.e. 145 years. Broad also took the 550th wicket of his career in the match. But with this he has also made a shameful record in his name. Broad’s bowling is liked by the Indian batsmen. Earlier in the T20 World Cup in 2007, Yuvraj Singh had hit 6 sixes in his 6 consecutive balls. Then Team India also won the title. Now after Bumrah’s aggressive batting, Team India is hoping to win this match. The team is currently 2-1 ahead in the series. India scored 416 runs in the first innings. In reply, England scored 16 runs in one wicket till the game was stopped due to rain on the second day.

Jasprit Bumrah hit 4 fours and 2 sixes in one over of Stuart Broad. Broad conceded a noball and 5 runs on a wide. In this way a total of 35 runs were scored in the over. Master Blaster Sachin Tendulkar wrote a special thing on Bumrah’s batting. He wrote on social media, is this Yuvi or Bumrah? Reminds me of 2007…While commenting on Sony Sports, Vinendra Sehwag said that Bumrah’s innings will be remembered for years.

Test cricket was started in 1877. Former Indian cricketer Ajay Jadeja said that earlier 8 balls were also bowled in an over. Still this feat was not done. In this way, the record of Jasprit Bumrah is special in itself. The match being played between India and England is the overall 2470th Test. In the 2469 Tests played before this, never more than 28 runs were scored in an over. 28 runs were scored in an over 3 times. Brian Lara of West Indies, George Bailey of Australia and Keshav Maharaj of South Africa did this. 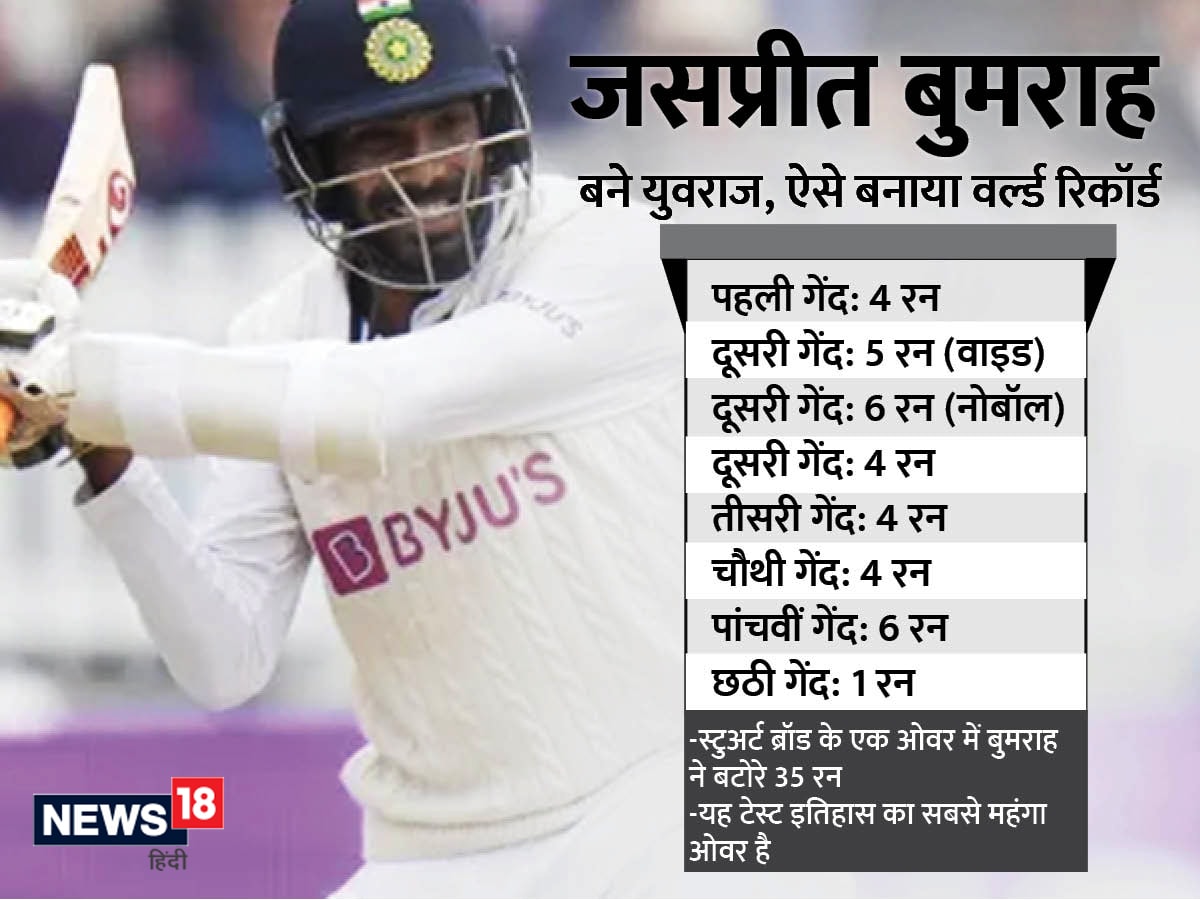 IND vs ENG: Jasprit Bumrah created a ruckus as soon as he became the captain, Broad scored 35 runs in one over, world record

Stuart Broad of England has become the highest run-scorer in an over in Tests and T20 Internationals. Yuvraj Singh scored 36 runs including 6 sixes in the 2007 T20 World Cup. This batting of Bumrah is also special because it is his first match as captain. He is the 36th player to lead the Indian team in Tests. Regular captain Rohit Sharma is not playing this match due to Corona.