New Delhi. Team India, led by Rishabh Pant, made a strong comeback in the series of five T20Is by winning two consecutive matches after losing the first two matches against South Africa. Now on Sunday, the deciding match of the series will be played at M Chinnaswamy Stadium in Bengaluru, the team which will win this match, the series will be named after him. In such a situation, both the teams will put full emphasis in the last fight. Due to winning the last two matches, Team India’s edge is a bit heavy. However, the news that has come about the weather of Bangalore before this match is going to increase the dismay of the cricket fans, as there is a possibility of rain in Bangalore on Sunday (June 19). In such a situation, rain can become a villain in the deciding match.

So far, in whichever cities the four matches of the series have been played. There was no disturbance in the match due to rain, on the contrary, the players had to face scorching heat and humidity. But, players will get relief from the heat in Bangalore. But, rain can definitely disturb the match. According to the report of Accuweather.com, intermittent rain may occur in Bangalore on Sunday. The day temperature will be 27 degrees and the probability of rain is more than 88 percent. It will be cloudy throughout the day.

IND vs SA: Rain can disturb the fifth T20 between India and South Africa to be held in Bangalore. (AccuWeather) 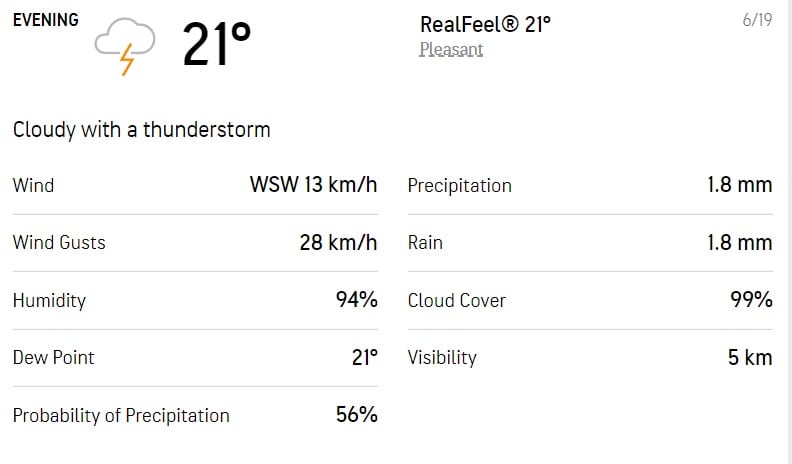 Rain in Bangalore may hamper the match
The fifth T20 between India and South Africa will start at 7 pm at the M Chinnaswamy Stadium in Bangalore. So how will the weather be like in the evening? Will rain disrupt the game? It also becomes necessary to take this. According to Accuweather.com, the temperature in Bengaluru will be 21 degrees on Sunday evening and the probability of rain is more than 50 percent. It will be cloudy even in the evening. At the same time, the wind speed will be 28 kmph. In such a situation, there may be a shadow of rain on the match. In this situation, there is little hope of cricket lovers getting to see a match of 20-20 overs.

IND vs SA 5th T20 Live Streaming: Where will India-South Africa face off in the deciding T20, watch live here

Why would Rishabh Pant toss a coin with his right hand in the deciding T20I against South Africa? Learn

India have lost three out of 5 T20Is here
So far 8 T20s have been played at the M Chinnaswamy Stadium in Bangalore. Out of this, on five occasions, the team chasing the target has won while the team batting first has got success. By the way, due to the small ground, a lot of fours and sixes are hit here. In the past too, this ground has seen rain for fours and sixes. The average score of the first innings is 154 while the average score of the second innings is 143 runs.

The last match between India and South Africa was played on this ground in 2019. Then the visiting team defeated India by 9 wickets. Batting first, India had scored just 134 runs in that match. It was achieved by South Africa by losing 1 wicket. Then Quinton de Kock had scored an unbeaten 79. India has played 5 T20s at this ground and has lost three.