New Delhi. Hardik Pandya and Dinesh Karthik returned to Team India after a long time. Both got a place in the team in the first T20 against South Africa in Delhi. Hardik took full advantage of this opportunity and batted in the style of IPL 2022. Hardik scored an unbeaten 31 runs in 12 balls at a strike rate of above 250 and played an important role in helping Team India cross the 200-run mark. Fans were very happy to see Hardik batting in a fast paced style. But, in the last over of the Indian innings, he did such an act with Dinesh Karthik, due to which he had to face the displeasure of the fans on social media. After all, what did Pandya do to Karthik? Due to which the anger of the fans broke out. Let me tell you.

Dinesh Karthik came out to bat after the dismissal of Rishabh Pant in the last over of the Indian innings. Enrique Norkhia was bowling this over. Karthik could not score any run on the first ball. He played the second ball towards midwicket and opened his account. Now Pandya had come on strike. He hit a six over long off off Norkhia’s fourth ball.

On the next ball of Norkhia, Hardik played a shot towards midwicket. But he did not run to take the run and because of this Karthik did not get the strike. Whereas one run could have been easily scored on this ball. Hardik took two runs off the last ball. In this way India scored 211 runs in 20 overs. Karthik could play only 2 balls in this over.

Nehra also annoyed by Hardik’s action
His IPL team coach Ashish Nehra was also angry on this action of Hardik. In a conversation with Cricbuzz, he said, “He should have taken the first run of the last ball. Dinesh Karthik was on the other end, not me.” At the same time, the fans also told this all-rounder a lot on social media.

Hardik Pandya had to become a victim of the anger of fans on social media. (Twitter) Hardik Pandya is facing criticism for not giving strike to Dinesh Karthik. (twitter) 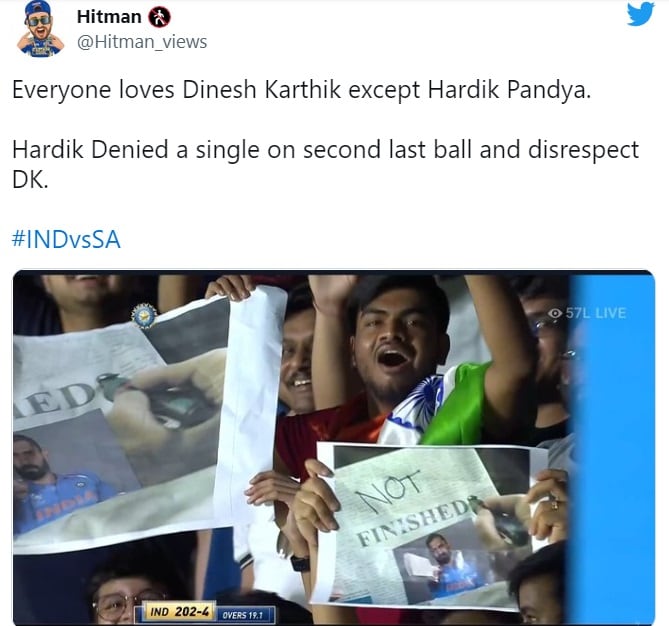 Avesh Khan had to break the bat of the African batsman, Team India had to pay a big price!

IND vs SA: Team India could not make the world record for winning 13 T20 matches, Shreyas Iyer became the villain

South Africa won the match with 5 balls to spare
211 runs also proved insufficient for India and the pair of Rasi van der Dussen and David Miller achieved this target with 5 balls to spare. Rasi scored an unbeaten 75 in 46 balls and Miller scored 64 runs in 31 balls. With this defeat, India’s dream of making a world record by winning 13 T20s in a row also broke. The second T20 between the two teams will be played in Cuttack on June 12.