New Delhi. Hardik Pandya surprised everyone with his performance in IPL 2022. He returned to the field only through IPL after injury and it was memorable for him. In the very first season, Hardik won the IPL title while captaining Gujarat Titans. His team defeated Rajasthan Royals in the final to become the champion in the debut season. Hardik gave a strong performance in the final as well. He played an innings of 34 runs along with taking 3 wickets. For this he was adjudged the player of the match. Now Hardik has got a special gift for winning the IPL title. Hardik has shared this picture on his Insta story.

Hardik has received a customized pendant as a gift, which has Gujarat Titans written on one side and IPL 2022 Champions on the other. Hardik is very happy to receive this gift and his wife Natasha has also made a video related to it, in which the anthem song of Gujarat Titans is being heard in the background.

Hardik took 8 wickets with 487 runs
Under Hardik’s captaincy, Gujarat Titans won 10 out of 14 matches in the league stage of IPL 2022. At the same time, Gujarat defeated Rajasthan Royals by 7 wickets in the first qualifier. In this match too, Hardik performed brilliantly with both the ball and the bat. He scored an unbeaten 40 runs along with taking 1 wicket. He, again, repeated the same performance in the final and took three wickets. Hardik dominated the entire tournament. He scored 487 runs in 15 matches at an average of 44. In the 15th season of IPL, Hardik also scored four half-centuries. Apart from this, he also took 8 wickets.

Hardik Pandya has got a special gift for winning the IPL title. (hardik pandya instagram) 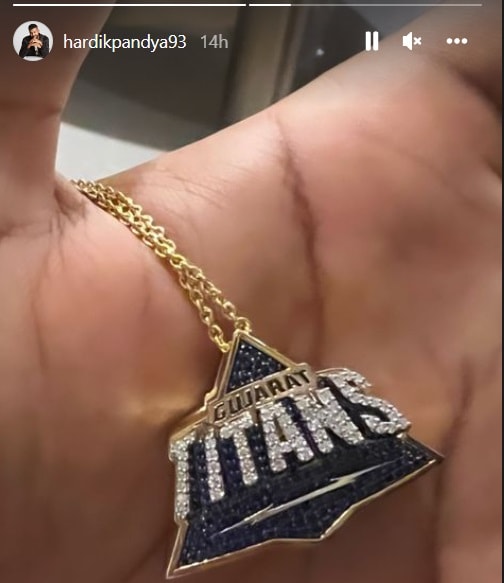 IND vs SA T20: KL Rahul’s The. Test of captaincy against Africa, 4 players are ready to take place if they miss

ICC said – there may be a reduction in the number of Test matches in the coming time, India will also be affected!