Mumbai. IPL 2022 was nothing special for MS Dhoni. The team lost to Mumbai Indians by 5 wickets in a match on Thursday. This was the team’s 8th defeat in 12 matches. With this the team was out of the race for the playoffs. The team could not reach the knockout only for the second time in the history of IPL. Earlier in 2020 also the performance of the team was poor. Against Mumbai, the team was dismissed after scoring just 97 runs. Although Dhoni scored the highest unbeaten 36 runs. In reply, Mumbai had achieved the target for 5 wickets.

However, MS Dhoni did not see any difference after the match. He was seen interacting with the players of Mumbai Indians. Not only this, he also gave him his signed jersey. Apart from this, he also gave a similar gift to the support staff of CSK. Before the start of the 15th season of the T20 league, Dhoni left the captaincy of CSK. But Ravindra Jadeja could not do anything special in the first 8 matches. After this Dhoni again got the captaincy. Apart from CSK, Mumbai’s team has also been out of the race for the playoffs.

The bowlers were praised

However, after the match, Dhoni had praised his young fast bowler Mukesh Chaudhary. Chasing the target, Mumbai lost 4 wickets for 33 runs. So the match became interesting. Mukesh took 3 wickets. But Tilak Verma made an unbeaten 34 runs to ensure the victory of Mumbai Indians. 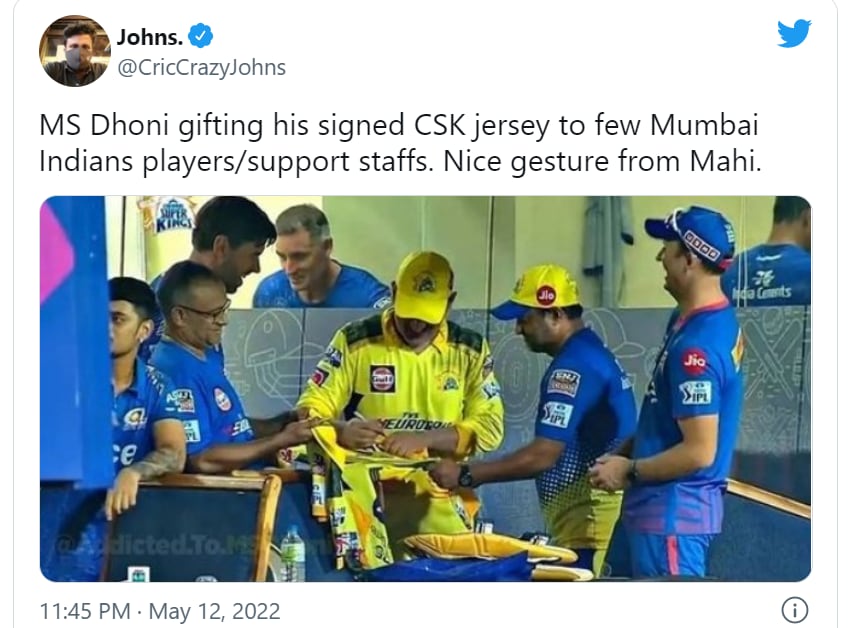 RCB vs PBKS: Bairstow’s storm in Mumbai, scored 50 runs in just 10 balls with fours and sixes

Earlier, left-arm fast bowler Daniel Samson did not allow CSK to score 100 runs by taking 3 wickets. He was also made the player of the match. Sams made a great comeback in the tournament. Pat Cummins scored 35 runs including 4 sixes in his one over against KKR. After that he was out of the team. However, later he was given a chance again in the playing-11.